Beyond what is known as 'reality' awaits dimensions that have always existed. Had Gracie’s parents only known what acquiring a horse for their daughter would entail, they may have chosen a different path. On the other hand, no matter which path we choose, we possess the power to alter that path if we become willing to step away from the 'known' and ride into the 'unknown' where magic and adventures are never-ending.

Join Prince and Gracie in their mystical adventure into the realms of the unknown where everything is possible; the realms where all worlds collide into infinity. It is the world that is known as "The Prince Chronicles." 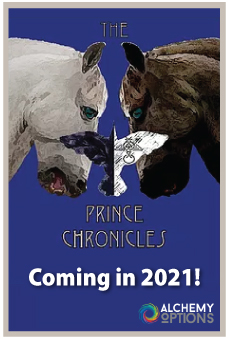 Feng Shui for Horses is an unusual, yet practical, guide for creating a lasting, more intimate relationship with your horse. With the premise that everything is energy, and becoming aware of that reality, we can teach ourselves to “tune in” to that energetic component and begin to relate to our horse as something much more than just an animal, and realize that ‘something’ is a part of us. Jane Li Fox’s, When God Wears Fur, is not just a book about dogs. Rather, it is a timely message for each and every one of us. It is a book about the transformational power of “love without condition,” and how the miracles can occur in our everyday lives when this kind of four-legged love is present. Each page is filled with practical words of wisdom. This book will give you the tools you need to create an abundant, peaceful and powerful life.

This book asks you to take a close look at your life and see what changes you would like to make. It then challenges you to be brave enough to 'step outside the box' of what are considered ordinary limits and create the life experiences you want.

The authors bring you insights and ideas for creating your ideal relationship. Written from the heart and with humor; you are guided through the early 'lustful' times of a relationship to the later 'stressful' years involving children and money. No answers are 'given' but you're challenged to create the relationship that works best for you.